Before I started writing stories, I told them. Yes, Mother called these lies, but they always entertained my audience (and usually got me out of trouble).

When my niece and nephews were little, I wove stories for them, spinning wild tales of Alden, an accidental knight of Green Wood who couldn't keep track of how many horses were in his stables, and his sister Freyda, who could travel anywhere in the Five Realms through a piece of broken glass.

When the youngest nephew became old enough to enjoy to the stories, Joel the Dragon Rider, who had a habit of telling lies, became integral to the tales. Unlike the other two, he always insisted that he be part of the stories by name, and as he's gotten older, he's taken more control of the stories, giving me prompts as to what should happen next. 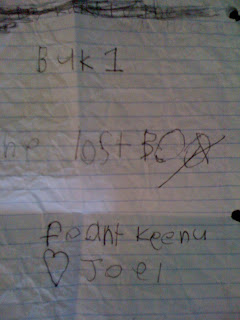 He once demanded a story that began, "Once upon a time there were five sisters who didn't get along" then told me the story when I didn't get it right.

This week, he wrote his first story--and mailed it to me! The story is about a little boy who sneaks out of the house, runs into the woods to play and gets lost. He wants me to include it in my book.

So, as I write down these tales, I will have to weave in a chapter about a boy who gets lost in the forest. Then again, maybe not.

Strangely enough, my oldest nephew does have trouble with math, and my niece did inherit the family's gypsy gene. And Joel, Lord bless him, has quite the habit of telling tall tales.

I sense the beginning of a long career! :) (twitter works!)

That would be putting his natural gifts to good use. :-)