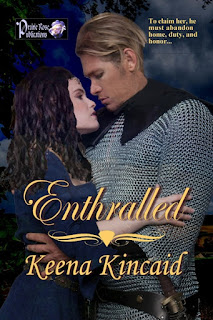 Read an excerpt
To claim her, he must abandon home, duty, and honor—or reveal the secret of her Sidhe heritage and risk losing her forever to dark magic...
William of Ravenglas wants only one woman—his foster sister, Ami—but she is promised to another, a fate sealed by his father’s recklessness. Resolved to her forfeiture, he forges a dangerous path to bring stability to the house of Ravenglas, balancing the secret demands of the queen against loyalty to the king.
Ami, true sister to Aedan ap Owen the minstrel, refuses her fate. She wants William. But when his kiss awakens her dormant magic, it triggers cascading events that sweep her into the queen's fiendish web and threaten William's life.
Now Ami must learn to control her fey powers or watch William die. But with a mystery lover in his past, even if she succeeds will he truly be hers? 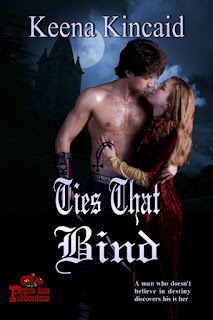 Read an excerpt
A druid who denies himself nothing desires the only woman who believes magic and love don't mix.
Out of place in the Plantagenet court, minstrel AEDAN ap OWEN misuses his Sidhe gifts for the king's dark business. Sent north to investigate rumors of treason and dispatch the troublemakers, Aedan discovers someone is murdering monks and stealing saints’ relics. And all clues point to Carlisle.
TESS, LADY of BRIDSWELL, refuses to rekindle her relationship with Aedan. She knows his reputation as a secret stealer—and she has a secret that must be kept. But her resolve falters when her uncle promises her hand to a man she despises and Aedan hounds her steps.
A would-be king uses the stolen relics to amplify his power, wielding it like a weapon. Meeting the traitor's magic with magic will prevent war, but it will also destroy Aedan’s chance to show Tess he has at last mastered the temptation of the ancient wisdom. Can Aedan renounce his magic to win Tess' heart anew or will he choose magic over love?

Read an excerpt
Abigail d'Alene has been sinfully in love with learning all her life, and as a widow, she now has the means and freedom to indulge in her passion. Pretending to be Abelard, a fifteen-year-old boy from an outlying village, she heads to the Latin Quarter of Paris and the abbey schools that will one day change the world.
Shocked by her ineptitude at masquerading as a boy, Alain of Huntly Woods, in Paris as a spy for Henry II, takes the young "Abelard" under his protection. He intends to keep her safe just long enough for her to recover her sense and go home. But when he discovers Abigail's uncle, confessor to King Louis VII of France, plots against the English king, his act of compassion takes a dark turn.
Alain has sold his soul to the Angevin devil in exchange for the king's promise of an heiress, land and power. But Abigail's audacity, intelligence and refusal to compromise spark enough friction between them to burn through his cold logic and carefully laid plans. As their passion grows, Alain must choose between protecting his king and betraying the woman he loves beyond all reason. 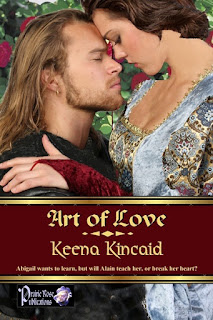 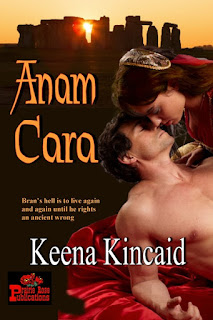 Read an excerpt
Branwyn ap Owen knows it's appointed for men "once to die, then the judgment," but his hell is to live again and again until he rights an ancient wrong. Unlike other such souls caught on a karmic wheel, he remembers the past, and he always remembers her.
Liza knows nothing of the vow trapping her in Bran's judgment, yet when he walks into her inn, she knows he could destroy the life she has carefully built over the years if she lets him get too close. Trouble is, Bran can't take a hint, no matter how blunt she is.
Determined to repair the damage of his first betrayal, Bran uses the knowledge of a thousand years to woo Liza. Yet just as he begins to regain her heart, a fresh betrayal threatens their last hope for love.