I'm over at Historical Belles and Beaus today

It's a small world--filled with conflict

My nephew recently spent a week with me. During his visit, I was exposed to the Disney channel more often than any adult should have to endure. While many Disney or Pixar movies have a layer of dialogue that appeals to adults, the TV shows do not. Most are insipid.

But like the movies, these shows show that Disney has conflict and happy ever after down to a science.

One of my nephew's favorite show, based on which one he actually sat and watched, is Wizards of Waverly Place. At first, I wasn't impressed. The characters were stereotypes: the semi-clueless, but loving parents. The overachieving, uptight sibling. The troublemaking, short-cut seeking but ultimately good-hearted sibling. The really dumb sibling used mainly for comic relief but who sometimes surprises us with his intellect and/or talent.

But then the nephew gave me the backstory: Only one of the three siblings will keep his/her wizard abilities as a adult. In fact, the three will have to fight each other for their powers, winner take all.

For a moment I sat there as the novelist in me wished that I'd thought of that. Then I started imagining all the ways I could use that conflict in a story. It pits the individual against family, personal desire and ambition against love and a place to belong. What a great way to create tension and sustain it over the course of a show--or book.

"Oh, they'll figure out a way to make sure all of them keep their powers," my nephew said. "It's the Disney Channel."

I thought about telling him about Bambi's mother, but decided not to ruin his faith in Happy Ever Afters. He is only eight, after all.
Posted by Keena Kincaid at 23.7.10 2 comments:

Leaf blowers and others ridiculous appliances

I woke to the annoying drone of a leaf blower this morning.

It's one of those appliances that I really don't get. The noise it makes reminds me of the incessant drone of the Vespa hordes in Rome, but at least the noise had a purpose: Survival. If you've ever watched traffic in Rome, or tried to cross a street, you know what I mean. Traffic laws are suggestions there, so the noise was the only warning you got that a swarm of 30 or 40 vehicles were coming your way.

In Charlotte, I lived in a neighborhood where yards were measured by the inch. Yet several of my neighbors had leaf blowers. I remember watching one blow leaves across his yard on a cool Saturday morning and thinking, if he used a rake, not only could I sleep but he also might lose the pudgy belly.

Today, the landscaping crew at my condo building just finished up mowing and are now blowing the clippings off the sidewalk. And while I understand they are being paid by the hour, a good stiff broom would not only do the job more quietly, but it would also sweep off all the goose droppings that spatter the sidewalk.

Really, I'd be willing to pay extra for quiet and cleaner sidewalks.

And because I titled this "other ridiculous appliance" and I really can't think of any, I'll turn it over to you. Any appliances that you could happily see vanquished from the globe?
Posted by Keena Kincaid at 20.7.10 2 comments:

The path from idea to book is a messy one

In a recent discussion about getting past writer's block, I shared my trick for busting through those word tangles. In short, I write the scene that's in my head, even when it has nothing to do with my WIP. 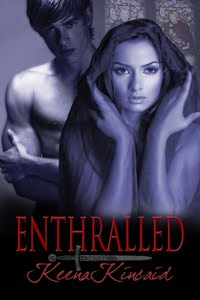 I discovered this trick a few years ago while I was trying to write a murder mystery. The scene just popped into my head and refused to budget. For days I tried to write around it. I was determined to "stick" to the story I was working on. Eventually, though I gave it, wrote the scene, and then immediately found my way through writer's block.
What came next was a shock. The scene I'd written had nothing to do with my WIP. Nor did it have anything to do with the next few projects. Eventually, I forgot about it until a few weeks ago when I found it buried in my files--and realized it was a prologue to my upcoming book, ENTHRALLED.
It isn't in the book, neither is the POV character, but it was the germ of a story that eventually became ENTHRALLED. The scene (mostly unedited):

The child was all his brother said she would be, and more. Robert of Ravenglas blinked, rubbed a hand over his eyes and looked closer at the child who stood before him. She didn’t move. If she breathed, he saw no sign of it in her immobility, and that caused him to hesitate. Such stillness seemed quite unnatural in a child of her years.

Dismissing his thoughts as whimsy born of grief and fatigue, he studied her critically. She was five, maybe six, at the stage of childhood where she was nothing more than sharp angles and large, wary eyes that brought to mind a stormy sky boiling over the North Sea.

He glanced at his brother. “Amilia’s eyes were not quite so…” he searched for the right word. “Unusual.”

“They were blue. Hers are blue.” The abbot toyed absently with a reliquary on the great oak table before him. “She is blonde, as your daughter was, and likely twice as clever.” He leaned over the table, his eyes bright and fixed on Robert. “This marriage is too important to this family to let it lie fallow.”

“Amilia was three at the betrothal. I hardly let it lie fallow.”

The knot of anger in his gut twisted and expanded until Robert thought he would explode from the burgeoning emotion. He knew the dangers of loving a child too much. It is not like Amilia was the first child he had buried. Pray God, she would be the last. He studied the scrawny, morose child that stood like a statue in the middle of the room. Blackness washed over his eyes, blotting out all sight, and he surged to his feet, wanting to be as far from this place of mischief and plotting as he could ride.

He blinked at the soft call and realized he stood before the open door. The cold winter wind cooled his rage as he ranged about the room. He turned to face his brother.

“Do not relinquish this opportunity to rise in this world,” Edward said. “Think how it will benefit William. He will make a most advantageous marriage with Braose championing his cause.”

Unable to counter his brother’s rationale words, Robert turned back to the girl. She was as fair-haired as his Amilia had been, yet where his daughter’s hair had run as straight as the old Roman road, this girl was crowned with rumpled curls that fought against the ribbon holding it back. If she listened to his brother, or even heard him, she gave no sign of it. Instead, her eyes focused on him, as if she measured his willingness to deceive.

The harsh scrape of wood on stone signaled his brother now stood. Now doubt he would soon begin circling him like a wolf did its prey. He was the elder, the heir, but Edward had always been the ambitious one. “I have never met a child with as sharp a memory as this girl, even as young as she is.” Edward neared and began to walk a small circle. “’Tis as if she remembers everything she sees or hears. Perfect recollection. She discerns meaning from what she hears, as well.”

“Women should not think so much, at least not those given to wife.” Robert turned to the girl, and frowned as he studied her. There was a puzzle here, but it eluded him. “Why, brother, do you offer me this child?”

“She has no choice.” Edward closed the second circle around them. “She is a resident of the abbey, with her ailing father and an elder brother. Her father will be dead within a few days. She cannot remain once that happens.”

The coldness in his brother’s voice caused Robert shift uncomfortably. Almost against his will, he looked down at the child. Was it his imagination or had the child somehow moved closer to him? The sadness in her eyes could not be mistaken for any other emotion. With a sigh, he knelt and took hold of her thin wrists.

“How many years do you have, child?”

“Latin. She does not understand Saxon,” Edward said.

“How is that important?" Edward asked. "These peasants hardly know when they were born.”

“But she is not a peasant.” He straightened and looked at his brother. “Who is she?”

“‘Tis unimportant,” Edward said. “Her father’s wealth and land is ours.”

Robert turned back to the girl. He’d have to dress her in blue to bring out what little of the color lurked in her eyes. He rocked back on his heels. So, he’d made his decision. “Has the abbot explained why I am here?”

“You will be Amilia. And you will have a brother, my son William.”

Robert held back a smile. “You will like William.” Tears flooded her eyes, and Robert deliberately softened his voice. “It is much to ask of you, I know. I⎯”

“There is no need to coddle the girl,” Edward snapped.

“If I am to make her daughter, I will start in this moment.”