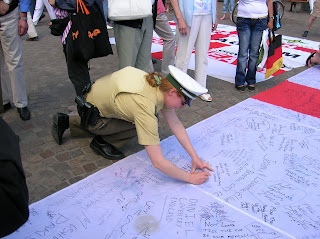 I am suffering from football fever. The World Cup has seriously distracted me from writing and almost every other endeavor. There was a moment in the Algeria/US game Wednesday that wasn't certain I would survive.
I'd love to be in South Africa right now. Even if I couldn't get tickets to the matches, just being in a host city is a fantastic experience. I was in Frankfurt just prior to the 2006 World Cup for a business meeting. Not only was the airport mayhem, but football fever ran high throughout the city.

The pictures are of an impromptu pep rally on the medieval city square. The English contingent was strong and loud. The lads were singing song after soccer after song, including "Never Surrender, Never Give Up." I was waiting for the banned song (the one where they sing, “If you won the war, stand up.” All the English then stand up, hold their arms out like an airplane and taunt the Germans.)
A number of police officers were enjoying the festivities, but they were also waiting around to see if the banned songs were sung.
Fortunately, everyone behaved--at least that day.

Very interesting, Keena. I am not a soccer fan at all, but it's the one world-wide athletic game that binds all people. Amazing. I admit, I've sneaked a peek now and then, and I'm thrilled when the US wins. All 3 young grandsons played or have played on soccer teams--they get to choose their sport, and only one of the three truly likes it. Our son--in his 40's--plays on a city team--all for fun--not that much competition between the teams. I loved the story about the banned song. Now that's something I never knew. Celia

Glad to hear you're enjoying the Cup! When you get back to writing, it will be all fresh!

Hi Keena! It's something to get swept up into this fervor, isn't it? That emotional connection is what makes you a great writer. Don't worry about your page count for now. Once the world cup passes, I believe you'll be raring to go!

waves* Hi to Keena. The world cup is a bunch of fun, isn't it? And it's ANYONE goes and that's why it appeals to me. Enjoy the fun! I just have to ask...

do you want a vuvuzela for Christmas?

LOL, Steph. I think I'll pass on the vuvuzela. What an annoying sound that is. :-)

To me the World Cup is very democratic...even the best teams can be out if they have one or two bad games. And because it's so hard to score and the guys are fighting for each goal, it's just friggin' fantastic when one goes in. I probably shouldn't say this, but Ghana's second goal today was a great goal. Only a handful of footballers could have made a shot like that.

Keena, my DH is glued to the TV switching between the World Cup and Wimbledon. Since my computer and the TV are in the same room, I have been listening to his loud comments and advice to the players, and keeping track of scores.

LOL, Mona. I gave them some serious advice yesterday, too. But after I told them they were playing like Betty White out there, they stopped listening to me.