Happy Friday! I'm at Chicago North's Spring Fling where I'll be speaking tomorrow. I scheduled the post to automatically be live at 6 a.m.--so let's hope it worked!

Today's guest is Eternal Press author Carrie Lynn Barker, whose books are named after books of the bible, but not necessary in the right order.

Carrie, take it away…

“You are so boring and intelligent that I want to shoot myself sometimes,” he said as we were paddling up river.

YOUR TURN:
Feel free to give us a teaser about your book and information where to find you online.

This is an excerpt from my latest release, Genesis.  The first volume in the series, Revelations, was also published by Eternal Press. 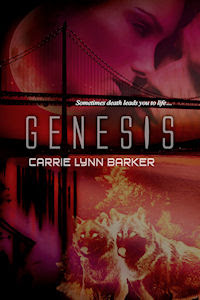 There were two women and one man. I had only known their kind once before in my life. I was… I guess the word is overjoyed at having found them.

The man was big, muscular but not too much, and had close cropped black hair. His eyes were golden brown, much darker than Jonas’s yellow ones, but still holding the same mystery. His face was a chiseled, utter perfection. Had he been another being I would have recommended modeling to him and his friends.

The women were just as beautiful and perfect. The taller one looked much like the man, who I knew to be her brother. She had long, flowing raven black hair that reached to her waist. Her eyes were the same deep gold color. Her features were striking, enough to make any man stop in his tracks.

The other woman, the one who thought of herself as their sister but technically was not, had shorter hair, blonde and soft. She was obviously the strong one, more of a leader than even the man was. She was plain, though still lovely, but I knew she was the wild one. Her eyes, when they finally locked on mine and noticed me watching them, were sky blue, bright and powerful. They reminded me a little of Starch’s.

Her name was Ripley, and she recognized me in an instant. Much to my surprise–or is it dismay? –she practically worshipped me. She spoke of me as often as she could, made it her mission in life to seek out the woman who started the revolution.

Well, I found her, and she wasn’t going to let me leave her sights until she got a proper introduction. Though I had no idea what she was thinking when the word ‘revolution’ went through her head. I am about the furthest thing from a revolutionary I can think of.

Friday Five...Three...One... is a chance for guest bloggers to share a bit about themselves in a fun format of Five Facts, Three Questions and One Sentence. If you'd like to be a guest on Friday Five, Three, One drop me an email. Put 'Friday Five' in the subject line.

Carrie,
Well...obviously it didn't post as scheduled. So sorry for the late start. So did you pick the last and first book of the Bible for your titles on purpose?

Yes, Keena, I did. Revelations seemed the obvious fit since my main character, Christiana has what are commonly called 'Christlike' abilities. Genesis was more about the dictionary meaning of the word than the story in the Bible. The third in the series, Exodus, is also about meaning. But, I thought I'd keep the trend going through these three novels.

Hi Carrie-Terrific interview. And Keena, we're almost neighbors. Live in the western burbs of Chi-town-have fun speaking. Just wanted to stop by and say hello. Have yet to read Carrie's books, but have watched her movie and it's awesome! Am in the middle of writing a must-see review. Revelation is on my TBR list. I have gotten myself into too many book clubs/swap review deals, LMAO-but plan on reading it in the near future! Love the excerpt and blurb. Dina Rae

Thanks, Dina! I've got your novels on my list too! I'm actually sort of glad I never got involved in those book swap things, since I'd probably never get anything else done. :) And, if anybody out there wants a copy of the movie, Wicked Bad, I've got free DVDs. Just visit my Facebook page and leave me a message. - Carrie

Hi Carrie...interesting blurb, and there's biblical connections?? The descriptions of your characters is vivid and arresting. I'll bet you've got your romance readers hooked to have more revealed! All the best on Genisis.