Giving Away Free Books With A Little Help From My Friends 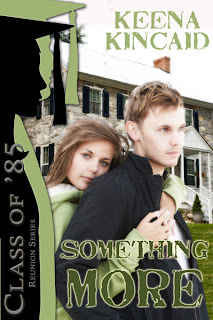 Did you ever wonder what happened to…The Prom Queen? The guy most likely to serve time in a federal prison? The couple voted most likely to succeed? If intrigued with the opportunity to rewrite a bit of history…or exact a little revenge…The Last Rose of Summer invites you to a reunion of The Class of ’85.

That was the original call for submissions from The Wild Rose Press and over twenty inter-related books were the result. Five of these books are available for FREE today on KDP Select exclusively on Amazon.

All five authors, me included, have multiple books published with the Class of ’85 series. We hope you’ll try out these titles and maybe come back for more.

If she could, Nora Emerson would demand a "do over" of the last twenty-five years. An emotionally abusive marriage, failed fertility treatments and a nasty, public divorce have left her bruised, skittish and determined to remain independent at all costs.

With an all-consuming business and a furious teenage sister on his hands, Nora is a complication Nick McPherson doesn't need. It's one he wants. Her vulnerability and kick-ass competency intrigue him, and the sexual sparks between them could set Summerville on fire. The more she insists the sex is just for fun, the more determined he becomes to turn their fling into something more.

Download Lonely Road To You by Jannine Gallant for free here.

Kate Abbott isn’t looking for excitement and is perfectly content with the secure life she’s built in Seattle, even if her son thinks she’s in an uninspired rut. Former rock star Tyler North has no intention of shaking up his life on the Montana ranch where he fled years before to escape the ravages of fame and fortune. Neither plan to attend their 25 year high school reunion in Summerville, but fate throws them together on a lonely road, leading them on a journey of discovery.

From the majesty of Yellowstone to the shores of Lake Ontario, Kate and Tyler fight unexpected attractions and old insecurities. Their journey is full of surprises and odd twists. From bison and bears to a deep crevasse and a crazy old man, they work together to overcome the obstacles in their path. But will these two opposites be able to put aside fear of change and rejection to take a chance on the promise of love?

Download To Be, Or Not by Margo Hoornstra for free here.

Barry Carlson had it all, a successful career in professional baseball and the adoration of any woman he wanted. Except one. Forced to retire in his prime, Barry returns to his hometown of Summerville, New York to coach the Minor League Hornets.

Twenty years ago, Barry broke through Amanda Marsh’s trust issues. He melted her ice, won her love, then walked away without a backward glance to survey the wreckage. Now Amanda is the head of public relations for the Hornets and happily single—until Barry slides back into her life.

Still reluctant to trust, Amanda gives Barry another chance. But the announcement of their twenty-fifth high school reunion leads to an asinine bet between Barry and his old buddies, and threatens to ruin their newfound relationship. As scandals of the past and present converge, can Barry and Amanda get beyond their differences to find their second chance at love?

Download Embraceable You by Kat Henry Doran for free here.

Award-winning photojournalist Dru Horvath doesn't stay in one spot for too long. Her vocation of documenting abuses against women worldwide prevents her from risking her heart. Every day working stiff Rory McElroy is a two-time loser when it comes to women—and he doesn't plan to take a chance on a relationship again, thank you very much.

But when Dru comes back into his life, he's not sure which poses the greater risk: protecting her from third world thugs who want to silence her permanently—or allowing the one woman who captured his heart years ago to embrace him for good.

Betrayed former society wife Kelly Kincaid only wants to make things right. Paying off her ex-husband’s debt of honor is tough when a minimum-wage job back in her hometown is the only one she can find. Could the answer to her problems be right in front of her?

The moment pub owner Michael Doogan sees Summerville High School’s former golden girl at the train station, he loses his heart. Again. He’d give Kelly Kincaid the world on a platter, but the stubborn woman is intent on going her way alone. A threat to her safety provides him the incentive to stand up for what he wants, but will he have the patience to win her love?

Labels: Class of 1985, Embraceable You, Jannine Gallant, Kat Henry Doran, Keena Kincaid, Lonely Road to You, Margo Hoornstra, Promises, Silver James, Something More, To Be, To Be or Not