The other day while searching the bowels of my computer for a lost file, I came across a travelogue I'd written nearly 10 years when I went to Rome on vacation. At the time, I shared it with a few friends. And it seems appropriate to share it here now. Enjoy.

Ah, the coffee in Rome (or Roma as the natives say. Roma has a beautiful ring to it, so I quickly adopt it into my vocabulary) is thick and strong without being bitter. Three cups and I’m wired. Four and I’m a restless wreck, racing around the city like a human Vespa.

Vespa, which means wasp (and they do sound like angry insects), is a brand name for those little scooters that zip through the warren of streets like toddlers without proper supervision. In Roma, there are no traffic rules. Scooters are on the sidewalks. They skip stop signs. Turn left on red, go the wrong way down one ways and routinely play chicken (and oddly win) with the little Smart cars and Peugeots that clog the roadways. Not even the lone Jeep Cherokee (deep green and dented) barreling down the street like a Sherman tank could scatter the swarm.

Hyped on caffeine, I do what I always do when I’m in a strange city where I do not speak the language. I go for a walk just to see what I can find.

I find the Capitoline.

Roma spreads itself out over seven hills, although one of them was destroyed by the Roman equivalent of a bulldozer (its army) during the reign of Diocletian to make room for some monumental building project. The Capitoline was the seat of power in ancient Roma, and it is the reason so many school children misspell the U.S. Capitol Hill as Capital Hill. 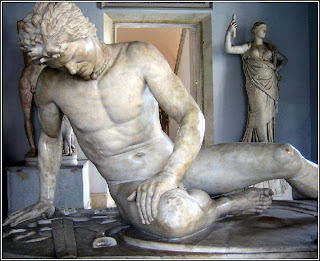 Gentle steps, designed by Michelangelo, lead to the top of the hill, where replicas of ancient statues of Castor and Pollux, twin gods worshiped by the Roman Republicans because they supposedly helped the army defeat bad king Tarquis, stand guard. Behind them are two museums that hold many of the surviving works of ancient Roma.

The Dying Gaul is among them.

So is the head of Constantine (the marble one, not the real one) and the Equine Statue of Marcus Aurelius, but those are stories for another day.

I climb the steps and my heart races. In heavily accented Frentalian, I buy a ticket and begin wandering through the marble corridors, making the acquaintance of headless gods, badly reconstructed athletes and disembodied heads of emperors, senators, and high-born Latin ladies.

Up the stairs. Straight ahead. Look right. There he is. The Gaul.

Now some people like paintings: oils, frescos, watercolors, the two-dimensional renderings of a world more colorful and static than reality. Others prefer architecture, the reach for a perfect balance of form and function, the conflict of man against nature stated in brick, wood and stone. But I am drawn to sculpture, marble brought one step shy of breath through chisel and hammer; our ideal form fashioned through violence by the hands of a man obsessed.

The Dying Gaul is the center of a room of warriors, and I wait until a tour group leaves before I approach. Able to get “this” close to the copy of the third century masterpiece, I study him intensely. The gash in his side. The tangle of hair that frames his face. The resigned look in his eyes as he gazes at the empty spot between his hip and hand. His hands are veined. His sword lies slightly behind him and he has fallen over his broken shield.

And I learn something new. 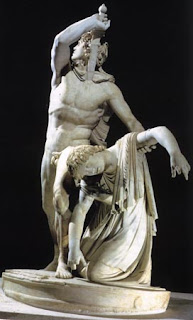 This Gaul, resigned to death, is part of a larger piece, now broken up and partly lost. Originally, the bodies of his wife and child lay in the empty space between his hip and hand, and they are what his fading sight fixes upon.

To his right, not far from his hand, stood another pair of figures that survive in a museum closed to the public. This Gaul holds his wife, whom he has just slain, in his left hand, pulling her close to his body even has he plunges his own short sword into his heart, going in just to the front of the collar bone. They die rather than face life as slaves.

In Italian reference books that I can only half-read, I find a drawing of what art historians think the entire grouping looked like when it adorned the hill, and there, captured in cold marble is life, death, war, and love - the best and worst of the human repertoire.

Tomorrow:  Keena and the men of Roma