Roma: A Day in the Country 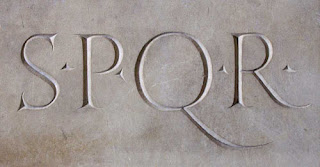 The other day while searching the bowels of my computer for a lost file, I came across a travelogue I'd written nearly 10 years when I went to Rome on vacation. At the time, I shared it with a few friends. And it seems appropriate to share it here now. Enjoy.

SPQR – Senatus Populusque Romanus. The Senate and People of Rome. Public buildings throughout the ancient city were inscribed with these words to remind Patricians and Plebeians alike of the good works brought to them by the government, never mind the insane emperors.

Nowadays, the municipal government uses SPQR, and you find the ancient seal on bridges as well as drain covers, trash cans and street cleaners.

Just 16 miles southeast of Roma, where the Tiber once poured itself into the sea, lie the remains of Roma’s first colony, Ostia. Abandoned in the 6th century for fear of barbarians and pirates, the town fell into ruin, which remain. Visitors are free to wander and wonder through the old city, which was once home to 50,000 men and women, merchants and children, slaves and sailors. 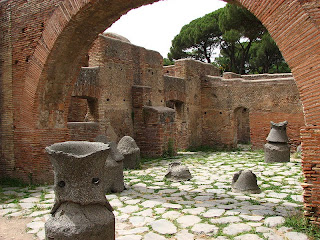 Ostia was established, first as a garrison, to guard the mouth of the Tiber and grew to be the port of entry for the North African grain that kept the city in bread. Today, I follow the Romans to Ostia.

It is early as I hurry toward the Circus Maximus, site of the ancient chariot races (remember Ben Hur?). The races held here were the NASCAR of the day. My personal theory is the charioteers’ descendants are the ones now racing Vespas like Dante’s damned through the city.

I slog past the circus while rain follows me like a pet through this city. I nimbly avoid being splashed by puddle-jumping Smart Cars as I search for the metro stop to take me to the sea. Unlike Paris, this is a city that I do not instinctively know. I have gotten lost several times and once ended up at Hadrian's Tomb (my favorite emperor, by the way) when I thought I was walking toward the Circus.

Finally, I stop an elderly man and say, "excusi sir, dove le metro stazione?" Yes. Words from three languages. Surprisingly, he understands me, and gives me equally garbled directions that I, oddly, understand as well. I walk on, dodging Vespas on the sidewalk. I find the station, pay my 1,500 lira (about 50 cents) and get a ticket.

With my nose pressed against the glass, I watch Roma disappear into the suburbs, which means under the city (sub urbis) in Latin.  Originally, the poor and disenfranchised, not the privileged, lived outside the city walls. It is a practice that persists here. As the last ugly high rise disappears, the countryside begins to take on that European-look that I've only found elsewhere in the Virginia foothills. The land is brilliantly green as it spread out in soft rolls like a baby's blanket.

Ostia, on the other hand, is not a pretty stopping place, but I head out from the station, using the pedestrian bridge over the two-lane road, and follow my instincts to the outskirts of the town. There, a small arrow points me to the archaeological site and ruins of Ostia Antica.

Yes, by this time you'd think I'd be sick to death of ruins, ruins and more ruins. Really, what possible interest could I find in tumbled crypts, waterless baths and roofless villas? Ah, but if you take a deep breath and look around without focusing on anything, you can see what once was: the people hurrying to the theatre, the merchants arguing prices outside the baths, the bored soldiers who just want to go back to the city, the bread, the circuses and whores.


I spend hours poking among the ruins, returning to Roma just in time for supper. Yes, I realize belatedly that I should have been an archaeologist. To look at shards and see a pot is optimism at its best.

Cool, Keena. What rich history. I don't mind ruins in the least. When I was in Hungary, there were all kinds of Roman ruins, especially near Pecs, but I digress. I loved learning about Ostia. But the gyspy children...?

I always thought archeology would have been a good field for me as well. Unfortunately, the closest thing my small college had to that was environmental science. That was my major. I suppose if I dreamed bigger I could have gone to a different school.

What a cool series, Keena!

Steph,
Despite the myriad of warnings, I never ran into the Gypsy Children. I saw them swarm several other tourists, mostly Americans...I can only assume I looked too poor or not American enough to target because they never came near me.

Not that I wanted to be robbed, mind you, but after all the warnings and legends, it was rather disappointing.