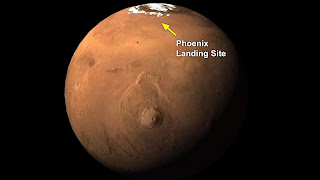 I picked up a new book over the weekend that has totally charmed me. Packing for Mars: The Curious Science of Life in the Void, written by Mary Roach (author of Stiff), explores all the weird and mundane stuff that gets left out of the press releases.

Like most authors, Roach begins with a series of questions, then answers them in a wry, but still slightly awed style.

She lets us know that barf bags don't work in zero-gravity conditions (0Gs) and explores at length how the human psyche deals with living for months on end in cramped spaces with people who will eventually irritate you to the point of murder. For the most part, space agencies don't talk about interpersonal relations in space. The official reports omit the fist fights (probably a laugh to watch in 0Gs) and the sex (also probably a riot in 0Gs, but let's not watch).

She also delves into the challenge of actually sending a team of astronauts to Mars. Given that it would be a five-year journey (if not longer) we'd have to assume conflict and coupling. The criteria for facilitating the latter became so complex that one astronaut suggested eunuchs. A joke, I hope.

These travelers must be able to function equally well in times of tedious boredom and imminent catastrophe. They also will become the ultimate authorities on how to reuse, reduce, recycle (filtered urine as drinking water?).
And despite the predicted isolation and stomach-turning beverages, her book stirs the ancient desire in me to travel. Very far.

As a child in the mid-70s, I read everything I could find on Mars, studied the planet, and even wrote NASA to find out what kind of qualifications I'd need to become an astronaut.

NASA wrote back, saying to study math, science, engineering, and then pointed out that only men are astronauts. I was furious. Going to Mars was an item on my bucket list before I knew what a bucket list was.
Why my fascination with Mars? I don't know. Who can explain why something captures our imagination and becomes a lifelong interest? What causes some people to follow sports with such a fervor they can recites stats for any team in any league while others build model train sets that include entire cities, even the bordello on the wrong side of the tracks?
I suspect these interests have roots in our earliest dreams, relics from the time when all things were possible and imagination and reality hadn't yet become separate in our minds.
It's still good to dream, and though I won't be crossing Go to Mars off my list, Roach's book is providing me with an interesting peak into the world of those who just might make the journey.

Isn't it amazing there was a time when they'd actually put stuff like that in an official letter? Born a little to early...

Thanks for the book rec!

Oops. I accidentally deleted my reply while messing with my settings.

Fun and interesting post! But why does that first picture of Mars look to me like a breast with nipple sticking straight out? Maybe because I'm a mammographer when I'm not writing? Or maybe my imagination is too firmly embedded in romance! either way, I bet you will all take a second look at that picture. Won't you? lol!

LOL, Lilly. Yes I took a second look, but to me it looked like an outie (in belly button terms).