How many writers does it take to create a villain


My story Something Special hits the shelves in a few weeks,  figuratively speaking. (It's an ebook). It wraps up The Wild Rose Press series "The Class of '85," which tells how classmates of Summerville High find love and new beginnings 25 years after graduation day. 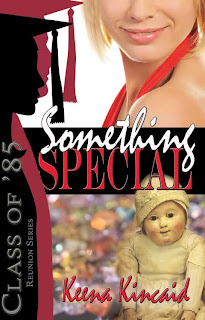 Throughout  the series, the high school bully looms in the background--only now he's got a badge and a drug addiction--Dickhead, a.k.a. Chief of Police Richard Heade.

The chief plays a prominent role in Something Special. My hero, Andrew Morgan, a detective with the Summerville Police, is running a side investigation into his boss's illegal activities. And when Richard learns of it, bullets fly.

But Richard's character arc--from drug-addled bully to potential murderer--happens over the 24-book series, with clues sprinkled in several books.

His first big appearance is in Bonded for Life by Sharon Buchbinder. We see how self-serving and self-centered the police chief is. He makes work miserable for Webster Bond, our hero. Web challenges the sheriff over proper use of SPD employees and realizes the extent of the chief's drug use. When he tries to talk to his wife about it, Richard overhears and assigns Web the "nightshift for life."

A cameo in the next book, Transatlantic Loving by Rachel Brimble, shows us his priorities. When the town's soccer coach, Aaron Taylor, rallies for support at the public beach for a Summerville sports center, Heade tries to stop him. Aaron publicly reveals Heade's lack of belief in the talent of the Summerville kids and his disinterest in providing the town with more jobs.

Richard and his wife, Beth (formerly known as Ready Betty) play bigger roles in An Indecent Proposal also by Buchbinder. In this story, Richard has partnered with a New Jersey mobster to buy the inn and turn it into a casino. The deal is thwarted when the heroine and hero reluctantly band together to purchase the old Summerville Inn. The seriousness of Richard's drug addiction becomes clear, as is his willingness to sidestep the law for his own gain.

We get a peek of Dickhead and his wife, past and present in Embraceable You by Kat Henry Doran, and in The List by Veronica Lynch, Ready Betty rewrites the definition of the word bitch.

Beth is a mess in her own right and definitely deserves her own story arc blog here at Typos, but let's just say she hides her unhappiness behind bad dye jobs, too much plastic surgery and make-up better suited for a "working" girl.

In Mad Dog and the Archangel by Doran, they play a big role in the beginning and briefly at the end, and the chief is pivotal to the plot and character arcs in Something Special. (We also see Web briefly when Andy comes in early and Web is finishing up paperwork from the nightshift.)

Writing the denouement of a character developing over the series was both a challenge and an honor. I had to make Richard's actions realistic in comparison to how others had portrayed him and to find a way to make Andy's investigation very personal.

By the time we reach their final confrontation, both have everything to lose.

Now it's your turn. If you've read the series--or written for it--stop in and share what you liked or disliked about Dickhead, the bully with a badge.

Fantastic tribute to a big character in a fantastic series, Keena - I loved writing Transatlantic Loving and especially the scene with Dickhead. Can't stand that guy!

So looking forward to the final installment! I am proud to be part of such a fantastic group of writers :)

All three of my stories for the Class of '85 series take place, for the most part, outside the world of Summerville. With just a pivotal scene at the reunion in each book, I didn't get the opportunity to include good old Dickhead. More's the pity! He's a larger than life character with plenty of faults to draw from. Can't wait to see how wrap up the series, Keena!

Hi, Jannine and Rachel, I'm glad you popped by. Dickhead doesn't show up in my first book. I hadn't planned to put him in the final one, but he just showed up one day...causing trouble. LOL!

Hi, keena,
I'm responding for both Kat and myself because she's tied up with some fish blog tour or something. The woman doesn't know when to quit.
Personally, I really like the different sides of Dickhead as shown by Sharon B and Rachel B.
I and Kat just made Ready Betty and Dickhead jerkoffs. It was a lot of fun writing them, though. I mean over the top for both of them.
Hoping you have great sales with Something Special. A Valentines Day release, right?
Veronica

I think your and Kat's portrayal of the Heades, when added to the others, help round out their characters overall. Sometimes you simply don't have time to go into GMC for every character in a short story.

Okay, I'm here.
The children are off somewhere, likely plotting anarchy or world destruction, whichever comes first.
I love the topic of this blog, Keena. And, truthfully, the character.
I admit, I'm the one who invented Dickhead. I patterned him after our former mayor who shall not be named and now holds a high ranking position in state government. Jerk.
Did not know him as a kid, but describing what I envisioned what he looked like as a bumbling teenager came very easy. I started with the hyper-developed Adam's Apple, gave him high waters [aka Steve Urkel] and a book bag weighing 20 pounds and went from there. Piece of cake.
Many many wishes to all of the Class of '85 authors who made my life as an editor an absolute joy to "come to work" each day.
Kathy

Wonderful wrap up on Dickehead. I didn't use him in my story other than his and Ready Betty's mention with the invitation to the reunion. My hero and heroine had their own troubles to worry about. This was a wonderful series. I'm glad I was a part of it.

Now that's funny Kathy. I saw Dickhead as a cross between Sheriff Buck from American Gothic and Barnie Fyfe. He doesn't look quite put together right, but he's got that aura about him that causes dogs to tuck their tails.

LOL! It's amazing isn't it as people can read the same thing and come away with such different mental picture.

Hi, Leanne. Thanks for coming by. Dickhead wasn't in my first story. I think that's why he insisted on being in the second.

Dickhead and Ready Betty appeared 'off stage' in all three of my Class of '85 stories. One of my heroines referred to them as 'instigators' of the reunion. It was even suggested they planned the entire three day event for personal gain.

Can't wait to read your take on the duo.

This has been a great series to be part of. I, like Kathy, enjoyed coming to work each day.

BTW - This is my third try at posing. If the other posts show up, I'm not responsible.

In my frustration to post, I forgot to mention something one of my heroes said regarding Ready Betty. "She always had a cold shower effect on me."

Did anyone see the description of Dickhead's mother in Kat's Mad Dog? Hilarious!!

Hi, Margo! Glad you were finally able to post. I have Kat's book, but haven't had a spare hour to read in weeks. I can't wait to dig into it, though.