Howl at the moon

When I was a kid there was a TV show called Friday the 13th--about cursed antiques and our heroes efforts to track them down. It creeped me out. Big time. But it also made Friday the 13th kinda fun.

Today's guest on Friday Five...Three...is an author who always has fun with the creepy creatures that go bump in the night. Stephanie Burkhart writes about werewolves, witches and vampires, and she's here to talk about her latest book, "Twilight Over Moldavia," a paranormal romance, book two in the Moldavian Moon Series.


She was born and raised in Manchester, NH. Went on an adventure in 1986 when she joined the Army and spent seven years stationed overseas in Europe. Now she lives in California.

I peered at my blog, sweat dribbling down my temples, nursing a Jack and Coke hangover and screamed.

Would you marry a man cursed to become a werewolf? 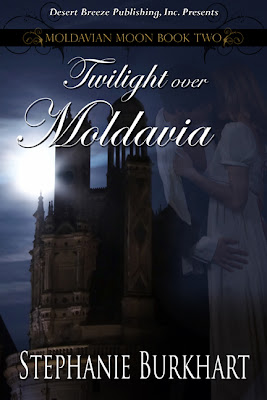 She nipped at her lower lip, and the energy between them surged. He tilted his head and drew her close, their mouths awkwardly skirting each other. Her breath, warm and hinting of apricots from the wine she had sipped earlier, ghosted over his cheek. Their lips brushed, and his pulse spiked. Gently, he continued to kiss her with hesitant exploration. She was the first woman he had ever kissed, and her lips were everything he had expected -- and more.
He placed his hands on her waist and tugged her close, pressing her against the length of his body. She put her hands on his shoulders and trailed her fingers along the nape of his neck.
Stefan groaned and increased the intensity of the kiss. Fueled by their mutual desire, his manhood grew hard. He hadn't known that feeling before. He could lose his head to it.

Friday Five...Three...One... is a chance for guest bloggers to share a bit about themselves in a fun format of Five Facts, Three Questions and One Sentence. If you'd like to be a guest on Friday Five, Three, One drop me an email.

Hi, Steph. Thanks for being here with us. When did you first become interested in werewolves?

Another were wolf fan here. I would love to know what inspired you to write abut weres.

Keena, thanks so much for having me here today. It's always fun to visit. :)

Mitzi,
Gosh, I think it was back in 2004 or 2005 and one of my writing friends starting writing some really cool vampire stories. She sold a couple back to Freyer's Bower back then. That stimulated me. I always had the creepy-crawlie things lingering the under bed wanting to get out, but seeing her do it, I wanted to do it to.

But I didn't want to do vampires. At the time, and even now, vampires are hot, but I wasn't sure what original spin I could them. There was much less wolf stories and I hit upon an angle I wanted to explore - the humanity of the wolf. From that germ of an idea, I laid the foundations for my "Budapest Moon" series.

Loraine,
I use it when my kids get flustered. All I can think to say is "thingie." LOL!!
Smiles
Steph

The snooze button is my friend too. I needed it this morning! Fun post, ladies!! Maggie

This is fun, isn't it? Steph, I loved your quick and witty answers. Your underwear? It was a big thing in our house..Mother always bought ours. Now...it's my turn.
Good luck, and best wishes..Celia

I loved your answer to what constitutes a crime against nature. I hope your son's sensory problems make him stronger and that he achieves a very happy life.
Your new release looks most tantalizing and the cover is just amazing. I know it will be successful. I enjoy reading your books so keep it up.

Maggie, Yes, that evil snooze button threatens to get me in trouble from time to time, too. LOL!!

Celia,
Gosh, I guess I never gave underwear much thought. It's been years since my mother bought my underwear. I do buy the boy's underwear though. LOL!!

Ella,
Thanks for popping in.

Sarah,
It's always nice to see you. I think it's a gorgeous cover, too. Joe is mainstreamed, which is nice, but he does struggle at times.