Like many small towns, my hometown has a traditional summer festival that celebrates a unique aspect of American life just for fun. In this case, it's Derby Days, which is always held in August and begins with a parade down Main Street.


Parade participants are staples of small-town life: The high school band. Little League football players and cheerleaders. The youth soccer association. Churches, businesses and veterans. This year, the armed forces were represented by a small group soldiers from conflicts as far back as World War II and as recent as Afghanistan. 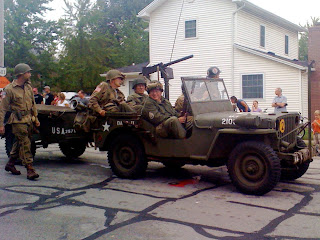 Whenever I see a group of marching veterans, I always wonder about those not marching.
Years ago, during an interview for the dedication of a new VFW Post in upstate New York, the topic turned to post traumatic stress disorder. "We didn't have a name for it," a WWII veteran said then (I'm paraphrasing) "but we all knew we weren't the same. We talked to each other."
But not everyone talked about it. My great-uncle Powell Henry was drafted into World War II. Because he'd been studying to be a doctor, he served as a medic, both in Europe and Asia. Although he was physically unharmed, he wasn't the same man after the war. When he came home, he put away his med kit, hid his medals and never told his stories. He lived on the family farm, growing tobacco, until his death in 1989.
In my studies and research for medieval romances, I've never come across an individual knight's reflections on war. In fact, I've not come across an individual's reflection on anything. However, drawing on more modern experiences, I assume the Crusaders (at least some of them) returned home different men. After all, how much can "being human" have changed in a thousand years?
The truth is I have no idea whether 12th century knights were changed by war or if they ever sat around the hearth and discussed it with fellow veterans. I make it so in my WIP, but I can do that because it's fiction.
How about you? As an historical author or reader, do you think war has always changed those who fought?
Posted by Keena Kincaid at 27.8.10

I agree, I think it did. Fighting in ancient times may have been less grisly and surprising (you never turned around in a trench to see your best friend has been silently blown away), but it was also more personal. Unless you were an archer, you looked into the eyes of every man you killed. I can't imagine how anyone could be unaffected by that. And I know exactly what you mean about your great-uncle Henry. My great-uncle Dud fought under Patton in WWII, and he shut himself up in the family homestead when he returned and rarely ventured out again - until the day he walked across the alley and hung himself in his garage.