It was a dark and chilly hike

Call me a brave woman. Or a foolish one. Earlier this week I took the niece and nephews, along with Mom and Pop (mine, not theirs) to Mammoth Cave National Park to explore the cave on a four-hour hike.
Plus, I have a heroine who's about to get lost in a cave, so I thought the research could be fun.
Let me save y'all future research right now: It's dark in a cave. And cold. 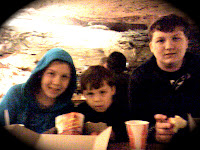 And an eight-year-old walks about 10x faster than a 70-year-old.
Add in 60-degree inclines, 300-step staircases straight down or up and the damp chill that seeps from the floor through your shoes, and you can imagine the loving looks I received from my traveling companions. 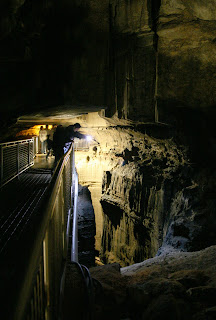 The youngest wanted to race the ranger, jump the rocks and touch the 100 million-year-old formations.
The oldest asked where the elevator was. The middle one kept busy telling the other two to be quiet.
By the halfway point, I was enviously eying the spelunkers in their knee pads, pith helmets and nicely dirty coveralls.
Meanwhile, Mom and Pop stayed at the rear of the tour group because they are too old to walk as fast. (Personally, I think it was to get away from the "when are we going to see the sun again?" questions.)
The best part, though, was when Pop mentioned the trip was much more rugged than when he went on the eight-hour tour with his high school class in 1956.
"Well, you were 17 then," I said.
"You're right," he said with a nod. "The park service has probably changed the route since then."
Posted by Keena Kincaid at 22.8.10

Loved it, Keena! I went spelunking with my mother and on another occasion with my kids and mother-in-law and father-in-law. We had a great time. But I used my experiences in Destiny of the Wolf...I love that kind of research!! :) Luckily, it wasn't 4 hours long on either excursion and my companions were having as much fun as me. :)But I loved the picture of the kids--they're expressions were priceless, and so was your experience! Great blog!

Yup, the Park Service is a tricky bunch of devils.
You've reminded me that I was born in Kentucky and never done Mammoth Cave. Bucket list.

Good post. Amazing how routes get more rugged as we get older. Despite your ordeal, I still want to do Mammoth Cave. Only a few hours away (I'm in Indy), so I have no excuse!

Keena, what an adventure! Thanks so much for sharing. I've never been to a cave, but it's on the bucket list - when I go to Romania.

Blythe: Definitely go. It's worth it. Although don't go on the four-hour tour. Take several smaller ones, including the historical one and the one by lantern light.

I was did Carlsbad Caverns. My reaction - scary and nerve-wracking. A caver I am not.

I been to the cave in Gibralter and the Blue John mines in Derbyshire, but nothing as awesome as your Mammoth Cave.
Guess you're just going to have to include the kids in your story!
Thanks for sharing.

P.L.: I went through Carlsbad Cavern when I was 16. The family went to New Mexico to visit relatives (who were in their 70s at the time) and the relatives took us through the cavern. I remember it being kinda cool, but the teenage boys in the tour group were cooler. LOL!

The tour in Carlsbad really has changed due to the air destroying part of the coloration. Now there are air locks, but people who saw it when your dad was in high school say it was much prettier then. I saw it in the 80's and I agree with P.L.--I am so not a spelunker! I hated the tour and could not get back outside soon enough. I've gone to lots of other caves, but none that deep or with tours that long. I used a cave in one of my books and use one for a WIP. For me, I'm staying above ground until I die.

Keena, I couldn't help laughing. You were brave taking older and younger relatives at once. I visited several caves in US, Bermuda, Greece and italy. It's not an easy ride.

We did two or three caves during my childhood vacations because Dad loved them. However, we did short cave tours because Mom hated them.

Me? They're cold, dark... and closed in! I have no interest in refreshing those memories, but it's great you took your niece and nephews along for your research!

Oh Dear! Sounds like you had your hands full.

I've been in several caves over the years and I'm always surprised at how thermally cool they are.

Gosh you're lucky your parents hung in there for the whole tour. I'm surprized they weren't griping about the number of stairs to be climbed to get back to ground level.